On Independence Day, one year ago, my resignation letter was sent to the home inspection company I had worked with since 2007. People have assumed that money was the driving force and/ or that I am going to be a cheap version of the company I was a part of. Truthfully, it boiled down to building a different brand, an audacity to believe in myself, and others. One year ago today, Deck Plate Home Inspections, LLC took its first step just prior to stepping on a plane bound for the Horn of Africa. Thank you to my family, friends, and brothers/ sisters of NMCB27 that have believed in me often despite myself.

This week's The Good, the Bad, and the Ugly is a story of black mold, a rotted section of band-board, and a "who done it?" mystery:

Significant black mold and rotted sections of band-board (the band-board and sill plates are the first wood framing members that sit on the foundation wall) were observed behind the brick veneer wall of the home. The home was built in the 80's without any visible weep holes at the exterior brick veneer. This condition could allow moisture buildup, but also we had sump pump drainage towards the home, and a dryer vent that did not appear to vent to the exterior. I could not say for sure if the dryer vented to the exterior because of the large shrub but I did not see one. Luckily a licensed contractor is being contacted to identify the source of the moisture and mold damage (could be all three observations), and my client Calvin H. hired Deck Plate Home Inspections, LLC. 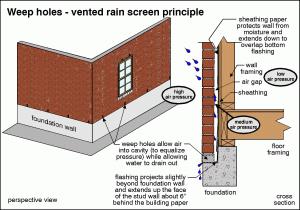 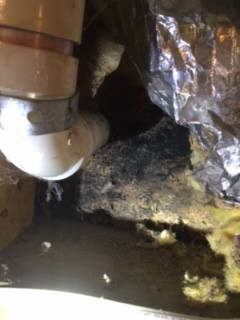 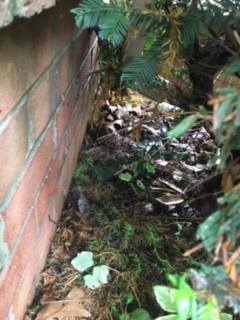 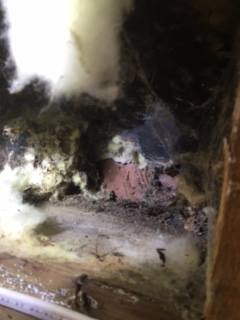 This week's The Good, the Bad, and the Ugly is a story of a HVAC contractor "half assing" their job after installing a new heat pump:

The owner purchases a new 2.5 ton (2014) Goodman heat pump, but the contractor did not want to bother going into the crawlspace and run the condensate drain line into the sump pit. Instead he runs a 3/4" PVC condensate drain into the crawl space opening and covers it with a vapor barrier. Luckily the system has not been installed long, summer just started, and my client Brian F. hired Deck Plate Home Inspections, LLC. 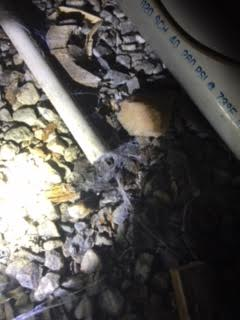 This week's The Good, The Bad, and The Ugly is a common one home inspector's get phone calls about:

The CSST manifold is not electrically bonded. Bonding of the manifold helps keep unwanted electricity off of the natural gas corrugated stainless steel tubing. From what I have read, the manufacturers require this but recently it became code for both plumbing and electrical. I recommended having a licensed plumber or electrician properly install the bonding at the natural gas manifold. For additional information, please review the following link: http://csstsafety.com/…/CSST-Direct-Bonding-Tech-Bulletin.p…; 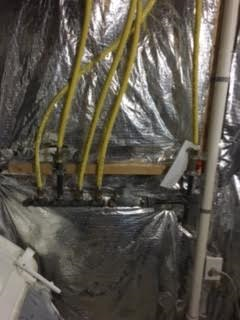 Another example of The Good, the Bad, and the Ugly!

In this case, we see that the structural floor joists have been decimated by whoever installed the overhead garage door. The diagram shows acceptable notches and cuts. 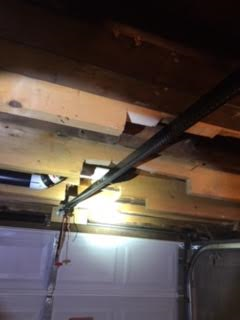 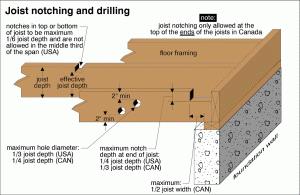 This past week we saw The Good, the Bad, and the Ugly!

Our client had just spent money on a home inspection that had shown a laundry list of issues. He and his real estate agent found what appeared to be a clean and well built home (not a flip). He then decided not to have a home inspection this time. So after learning about this property,I told his agent that I would drop the price of this home inspection by $120 if he hired me. It sounded like a well built home, was near me, and all the people involved were rational! Well good thing he did! The roof was shot. The rest of the home was clean and very well built but the roof is going to cost someone $11,000. That someone is likely not my client because he has a great real estate agent and Deck Plate Home Inspections, LLC on his team! 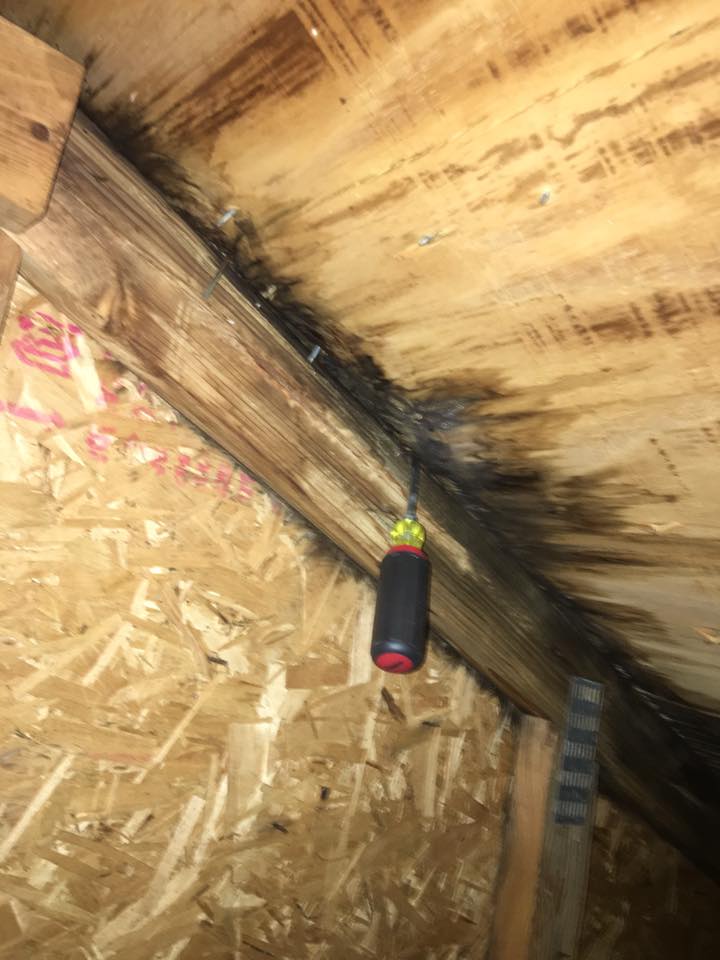 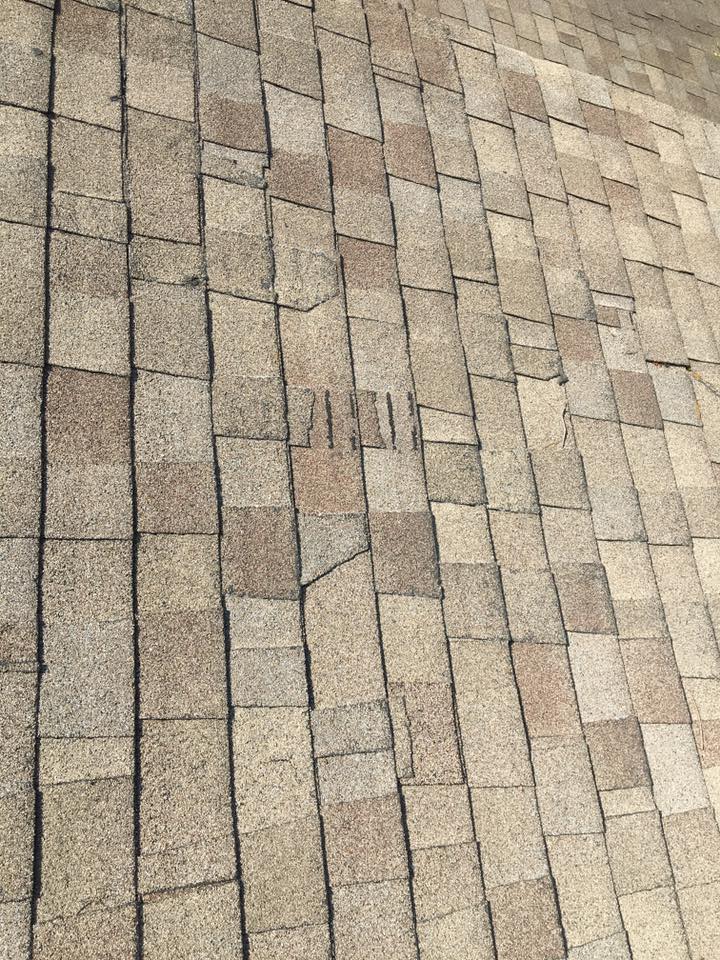 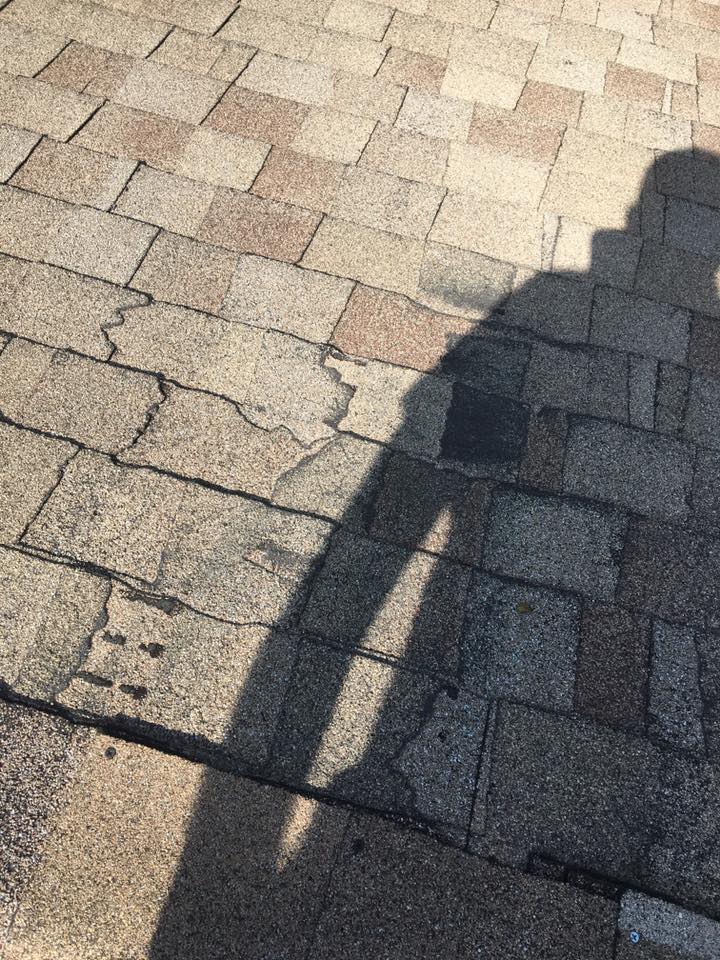